From: The Fourth Way ® Bookshop  ♦  This book presents the definitive edition of Ouspensky's famous first series of five psychological lectures which preceded his second series of five cosmological lectures known as The Cosmology of Man's Possible Evolution.  Together they form a complete whole view of man in the world.  These lectures reproduce Ouspensky's own manuscripts and are in exactly the form he introduced these ideas between 1934-1940.

Studies man in view of what he may become.  Describes how man must work simultaneously on his knowledge and his being to find inner unity.  These lectures were intended by Ouspensky as introductory material for people interested in the work in England.  This material is still unmatched as a brief statement of the work's psychological ideas.

Designed to be read aloud at weekly meetings of small groups of people interested in the work, they are almost a basic primer of Gurdjieff's psychological ideas on consciousness and spiritual development.  They were constantly revised as new groups came into existence and took their final form only after Ouspensky moved from London to New York, where he continued to teach from 1941 to 1947.

The psychology Ouspensky sets forth in these introductory lectures has existed in one form or another for thousand of years and, unlike modern psychology, studies man from the point of view of what he may become.

Once a man realizes how little control he has over his reactions to external circumstances and internal stimuli, he may wish to find a way to become free of this mechanical way of living.  Ouspensky describes how a man must work simultaneously on his knowledge and his being to find inner unity and why although his developments depends on his own efforts, this is very difficult to achieve without guidance from a school.

Peter D. Ouspensky (March 4, 1878 – October 2, 1947), (Pyotr Demianovich Ouspenskii),  a Russian esotericist known for his expositions of the early work of the Greek-Armenian teacher of esoteric doctrine George Gurdjieff, whom he met in Moscow in 1915.

He was associated with the ideas and practices originating with Gurdjieff from then on.  In 1924, he separated from Gurdjieff personally, and some, including Rodney Collin among others, say that he finally gave up the (Gurdjieff) "system" that he had shared with people for 25 years in England and the United States, but his own recorded words on the subject  ("A Record of Meetings," published posthumously)  do not clearly endorse this judgement nor does Ouspensky's emphasis on  "you must make a new beginning"  after confessing  "I've left the system";  all this happened in Lyne Place, Surrey, England in 1947, just before his demise.  While lecturing in London in 1924 he announced that he would continue independently the way he began in 1921.  All in all, Ouspensky studied the Gurdjieff System directly under Gurdjieff's own supervision for a period of ten years, from 1915 to 1924.  Ouspenky's book In Search of the Miraculous is a recounting of what Ouspensky learned from Gurdjieff during those years.

He died in Lyne Place, Surrey. Shortly after his death in 1947, The Psychology of Man's Possible Evolution  was published, together with In Search of the Miraculous.  Transcripts of certain of his lectures were published under the title of The Fourth Way  in 1957; largely a collection of question and answer sessions, the book details important concepts, both introductory and advanced, for students of these teachings.

Some years ago I began to receive letters from readers of my books.  All these letters contained one question, what I had been doing after I had written my books, which were published in English in 1920 and 1931, and had been written in 1910 and 1912.

I could never answer these letters.  It would have needed books, even to attempt to do this.  But when the people who wrote to me lived in London, where I lived after 1921, I invited them and arranged courses of lectures for them.  In these lectures I tried to answer their questions and explain what I had discovered after I had written my two books, and what was the direction of my work.

In 1934 I wrote five preliminary lectures which gave a general idea of what I was studying, and also of the lines along which a certain number of people were working with me.  To put all that in one, or even in two or three lectures, was quite impossible:  so I always warned people that it was not worth while hearing one lecture, or two, but that only five, or better ten lectures could give an idea of the direction of my work.  These lectures have continued since then, and throughout this time I have often corrected and rewritten them.

On the whole I found the general arrangement satisfactory.  Five lectures were read, in my presence or without me;  listeners could ask questions;  and if they tried to follow the advice and indications given them, which referred chiefly to self-observation and a certain self-discipline, they very soon had a quite sufficient working understanding of what I was doing.

I certainly recognised all the time that five lectures were not sufficient, and in talks that followed them I elaborated and enlarged the preliminary data, trying to show people their own position in relation to the New Knowledge.

I found that the chief difficulty for most people was to realise that they had really heard new things, that is, things that they had never heard before.

They did not formulate it for themselves, but in fact they always tried to contradict this in their minds and translate what they heard into their habitual language, whatever it happened to be.  And this certainly I could not take into account.

I know that it is not an easy thing to realize that one is hearing new things.  We are so accustomed to the old tunes, and the old motives, that long ago we ceased to hope and ceased to believe that there might be anything new.

And when we hear new things, we take them for old, or think that they can be explained and interpreted by the old.  It is true that it is a difficult task to realize the possibility and necessity of quite new ideas, and it needs with time a revaluation of all usual values.  I cannot guarantee that you will hear new ideas, that is, ideas you never heard before, from the start;  but if you are patient you will very soon begin to notice them.  And then I wish you not to miss them, and to try not to interpret them in the old way. 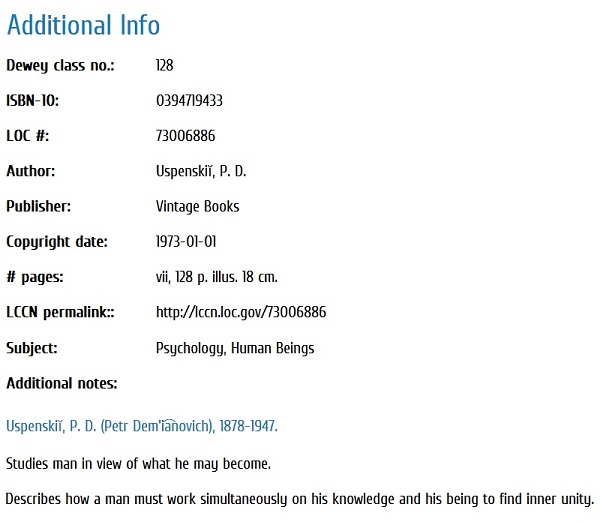